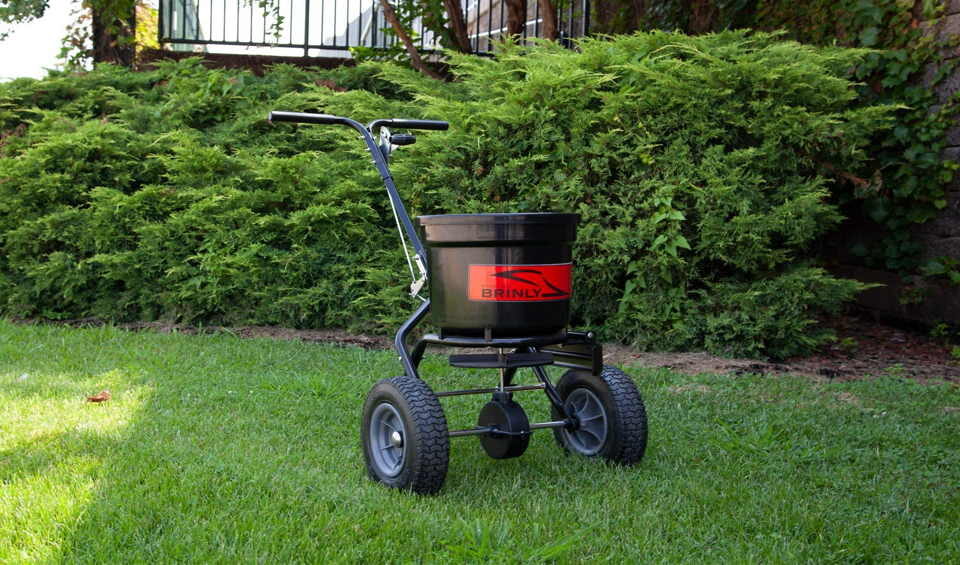 When it is time to broadcast grass seeds, fertilizer, insecticides, and more, you’ll probably want to reach for a broadcast spreader —or should it be a drop spreader?

As you may already know, the two implements operate differently, and which one is right depends on the job at hand and the results you’re looking for.

And so understanding the big differences between these two precious pieces of equipment will help ensure that you’ve got the right tool for the task.

This brings us to the debate we will have in this article: broadcast spreader vs drop spreader.

So let us compare these two competing material spreaders to help you make the right decision.

Broadcast spreader vs drop spreader: Which should you buy?

What is a broadcast spreader?

A broadcast seeder (sometimes called a rotary spreader) is simply a piece of farm equipment designed to be used to spread lime, fertilizer, seed, sand, ice melt, and more on your yard.

When I say spread I meant the tool literary spreads (distributes) materials in all directions.

Some broadcast spreaders can additionally be used under a drone.

How does a broadcast spreader work?

To facilitate broadcasting in all directions, there is a spinning plate (often under the hopper) to throw the material falling down from the hopper in a wide pattern/.

Quick Note: A pendulum may be used to spread instead of the spinning disk in some mid-sized commercial spreaders. This spreading mechanism is preferred because it has better consistency in spreading.

What is a drop spreader?

A drop spreader is so-called because it drops the product on specific spots as it is being pushed along/towed behind (and won’t spray materials all over the place).

Put another way, drop spreading is more precise because the design of these spreaders gives you control over where you exactly want the product to fall.

How does a broadcast spreader work?

Regarding how it operates, the material in the hopper is typically drawn down by the forces of gravity plus vibration as the spreader is pushed/towed.

The seeds or other product will in the end drop down onto the surface through the openings at the bottom of the hopper.
Keep in mind that there are regular gaps (between the openings) so an even and efficient dropping pattern is usually maintained.

Besides, most models come with a rotating agitator to ensure there is uniform flow of your products.

Broadcast spreader vs drop spreader: What does each spread excel at?

Now it is time to look at where each of the spreader shines..

What is a broadcast spreader good at?

For this reason, you’re likely to complete the job in less time with a broadcast spreader.

In a nutshell, a broadcast spreader is the best choice if you have medium to large properties to cover.

It is also important to mention that these spreaders spread lawn care products on lawns without striping the yard.

The biggest downside of a broadcast spreader is poor targeting- and they are more difficult to calibrate because it is impossible to catch the product as it is being thrown out.

In short, this type of spread is not ideal if your project involves spreading nearby areas like sidewalks, driveways, or landscaping (in general, around obstacles).

But you if you want to improve precision, you can try to use a handheld broadcast spreader– these are easier to control targeting as it is carried at the waist level.

But that means you’ll be doing a lot of walking (it’s more fatiguing than when one uses a tow-behind and can be impractical if you’re looking at spreading over large open areas).

What is a drop spreader good at?

For the most part, drop spreaders tend to be more accurate and spread more evenly than broadcast spreaders- recall it drops materials directly underneath as it is being pushed/towed.

As such, it is the preferred spreader for challenging spots such as against the house, nearby flower beds, narrow green strips, and tight turns.

One issue with drop spreaders is that it takes longer to complete the job as more trips are needed.

Plus, you must be careful not to apply too much/too little material in one spot- it is an open secret that a drop spreader can easily cause fertilizer burn.

The other drawback you cannot ignore is the risk of stripping your yard again if you don’t use the correct procedure.

Speaking of which, the recommended technique to ensure smooth and even spreading when using a broadcast spreader is overlapping.

Is a rotary spreader the same as a broadcast spreader?

As mentioned, a broadcast spreader is sometimes referred to as a rotary spreader so they’re the same thing.

Which is better drop spreader or broadcast spreader?

So, is a drop spreader better than broadcast?

Can I use a broadcast spreader for grass seed?

Broadcast spreaders are extremely versatile and can be used to spread nearly all products in your lawn including grass seed, ice melt, herbicides, fertilizer, etc.

To summarize, we would recommend a broadcast spreader unless if the job at hand requires maximum precision.

In other words, a drop spreader is the way to go if precision is more important to you especially for smaller yards while a broadcast spreader is the best bet in all other scenarios including for big open spaces such as athletic fields.

PS: Here are the bestselling spreaders at Amazon

12 useful Polaris ranger farm attachments to add to your toolshed