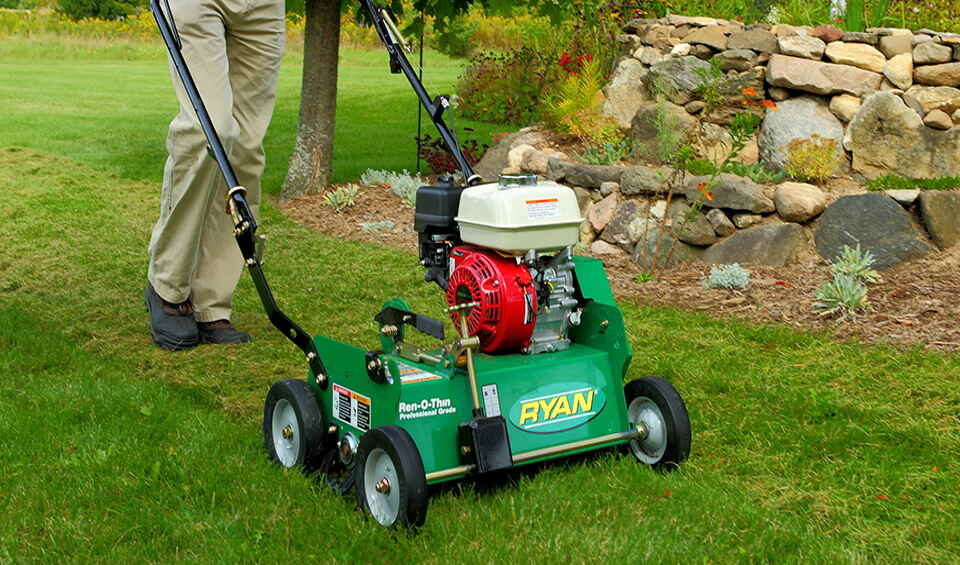 Wondering when to power rake lawn? This is for you…

After mowing your lawn severally, you might have noted that there is a layer of dead turfgrass tissue developing between the soil surface and the grass level.

This layer is often referred to as thatch and can be felt from the springy effect on your step when walking on the lawn.

Now, when you realize that the thatch has gotten thicker than ½ inch, you need to take action otherwise you’ll be risking stunted lawn health because thatch blocks water, air, and nutrients from penetrating to the roots.

So, should you power rake or just use a standard dethatcher- electric, gas-powered, or manual -to remove the thatch that might harm your grass?

Before answering this question and explaining when to power rake, it’s important we differentiate between the two thatch removal methods..

To begin with, dethatching is generally considered the less aggressive or ‘gentler’ process of getting rid of thatch..

You see, a dethatcher picks out only small deposits of thatch that’s getting in the way of moisture and air reaching the soil and is nowhere near as ‘hostile’ on thatch as a power rake.

Subsequently, dethatching is just effective for lawns that are still mostly healthy.

In contrast, power raking is a more violent way of eliminating debris, dead material, and crust which often builds up between the top surface of grass and its root system.

To be specific, a power rake is a more powerful tool- typically the same size as a push mower- and takes out 2-4 times more thatch compared to a dethatcher.

It thus guarantees maximum thatch removal in reduced time making it the best approach for lawns badly hampered by loads of thatch.

But power raking is not all that rosy- the vertical tines can as well pull out the living turf particularly when power raking deeply which means an extensively damaged lawn by the time you’re done.

But you can avoid such problems by power raking only when necessary..

This brings us back to our main question: so, when should you power rake…

Keep reading for the complete answer…

When to power rake lawn

As mentioned, and as a rule of thumb, you should only power rake when thatch has grown more than 1/2” deep.

To be sure, simply cut a couple of plugs 2-3” deep and check if thatch (the reddish-brown layer between the grass and the roots) is over ½-inch thick.

Also keep the following in mind:

You should power rake when the grass is actively growing as this allows your turf to recover- power raking tends to cause some damage to healthy grass.

To be clear, the ideal time to power rake cool-season grasses such as Rye grass, Bentgrass, and Kentucky blue grass is during the early months of the spring.

In the same vein, the right time for warm-season grasses like Bermuda grass, Centipedegrass, and Zoysiagrass is typically in late spring/early summer.

Time the activity such that the grass will have at least a 30 days growing (and recovery) window following power raking.

For the best results, you should not power rake when the ground is wet- you want the soil just moist not excessively wet.

That’s because the grass may be pulled out if you power rake when the soil is extremely wet- of course, live grass plants fail to hold well in too wet soils.

The final thing to note is that power raking should precede seeding/topdressing- you could be among the folks who usually overseed the lawn every year.

Why is this important?

It simply ensures that the seeds do not encounter a barrier of accumulated organic matter when sprouting – this can weaken the new grass.

Likewise, if you’re planning to topdress your yard, power rake it before.

That way, the nutrients go straight to your grasses’ root system since they’ll not be obstructed by layers of thatch.

What to do after power raking

After power raking, it is advisable to rake the thatch (use a normal rake) that has been loosened and dispose it off the lawn.

In case you notice the formation of bare spots, use patching products like the revolutionary Scotts® EZ seed® patch & repair mix to mend your lawn.

You can then fertilize it to aid the grass healing but we only recommend the application of fertilizer after power raking and never before.

You probably know that thatch develops mostly in lawns that suffer poor aeration or those where pesticides and fertilizers are used often.

This brings us to another vital post power raking chore- aeration.

You can then overseed (the best time is three weeks after aeration if you’re taking this route) and if you see it useful, fertilize the lawn.

How regularly should you power rake?

The best frequency to power rake is once a year (maximum is really twice a year).

Our advice is to let the neighborhood borrow the tool (you can also rent it out) since there is no value in having it lying idle for the larger part of the year.

When to power rake lawn- recap

To recap, you should power rake if formed thatch is more than ½-inch thick (and when there’s an outrageous amount of thatch sitting under the surface).

To be certain that power raking is needed, remove a sample of grass and soil from the lawn, and measure the depth of the thatch.

Go ahead and power rake if it exceeds ½”.

Levelling a lawn that is already laid – simple, practical solutions