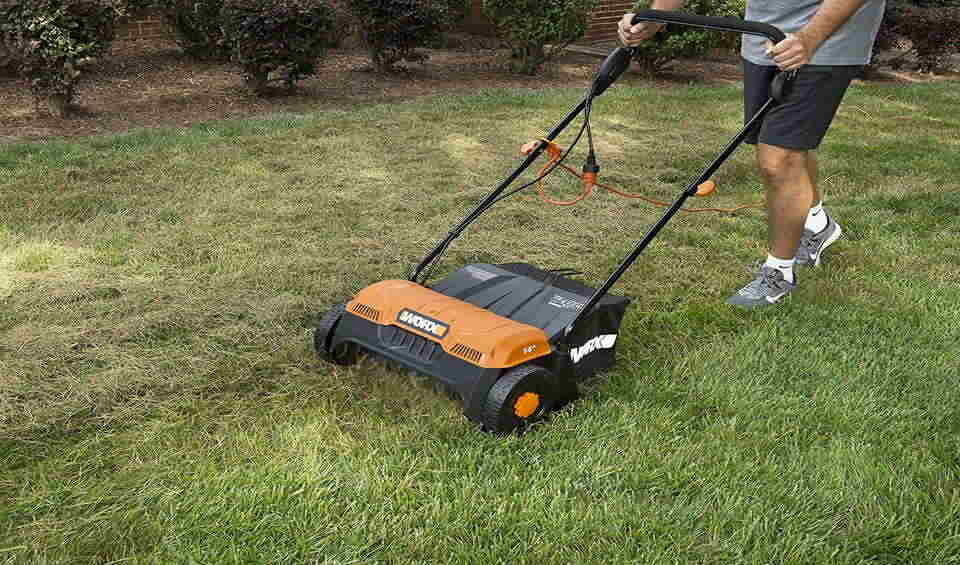 As an Amazon affiliate, we may earn a small commision from qualifying purchases.

Thatch- a tightly bound layer of living and dead plant material that forms between the grass and the soil- tends to build up slowly but surely.

Interestingly, while it can hinder proper growth by preventing air and vital nutrients from reaching the roots, thatch is not all that bad.

In fact, a thin layer of thatch is not only normal for the most common grass species but also hugely beneficial for your lawn- it slows water loss, maintains helpful microbial activity, protects your grass from foot traffic, keeps soil cool, and more.

In short, you should not always dethatch your lawn whenever you have a thatch issue.

We will discuss the pros and cons of dethatching lawn in this article to help you make an informed decision.

Pros and cons of dethatching lawn – what you should know

The first question we have to address is: Does thatch really pose a big problem for our lawn?

But there’s a caveat: Not all the time.

Listen to this crucial fact… thatch will only impede the health of your turf if it has formed excessively.

So what does that mean?  It simply means that you should only be concerned about thatch buildup if it’s ½” thick (or more).

Because too much thatch is impermeable and will restrict all nutrients and moisture to the upper layers of soil leading to problems like:

In other words, only lawns with an excessive thatch layer need attention.

Which brings me to the other key point..

Dethatching is NOT always the best solution for thatch!

Let’s discuss this a moment…

You see, dethatching can hit a lawn hard in several ways.

First, a dethatcher (a power rake can work as well) tends to tear and rip turf that’s still dormant and you can bet that often, the affected grass won’t recover after the procedure.

In addition, dethatching with power equipment could bring up crabgrass (plus all other nasty weed seeds) exposing your lawn to a possible infestation.

So, what safer options do you have?

1.   Rake the thatch from your lawn

Tackle the thatch, yes, but use a thatch rake like this.

Simply grab a good dethatching rake and rake some of the formed thatch from your turf – done well, this is less stressful to the vulnerable grass and promotes quicker recovery.

Here’s the truth: raking is one of the best approaches for a thatch layer that is between ½” and 1 inch thick.

When you aerate, (note that you should core aerate), you also get rid of the thatch- core aeration involves using a lawn aerator (features hollow tines) to remove plugs of soil or “cores” and thatch from the lawn.

This will boost air flow, reduce soil compaction, and aid root growth- of course, the right nutrients and water will also be penetrating all the way to the roots.

In most cases, core aeration is helpful for thatch layers 1-inch and under (recall that you only have to worry about thatch that’s at least ½-inch thick).

When to dethatch lawn….

Question: What if your thatch layer is more than 1″ thick?

Now, as you may have guessed, dethatching is justified for such extreme thatch buildup.

However, it must be said that dethatching should essentially be viewed as nothing else but a very last resort.

In reality, lawns only develop that much thatch because of ignoring some of the recommended care and maintenance procedures so very few lawns warrant dethatching.

For instance, proper fertilization and watering (combined with timely aeration) should keep the thatch at a healthy level.

With all that out of the way, here are the most prominent pros and cons of dethatching lawn you should be aware of.

My assumption is that you truthfully have a terrible thatch problem and it seems the only way out is dethatching your lawn.

The biggest drawback of the equipment-powered dethatching process is that a power rake or a tow-behind dethatcher is typically too aggressive and you’re almost sure it will hurt the grass.

Some patches of the lawn may, for example, remain bare in the aftermath particularly if the operation is poorly timed- timing is vital since you want your turf to have sufficient time to recover.

In a nutshell, it’s important to keep the pros and cons of dethatching lawn we have explained above before seeking the help of a professional lawn dethatcher or renting a dethatcher (if you’re a DIY enthusiast).

Don’t forget that dethatching is only practical when your lawn has a beyond-normal thatch problem – specifically when it’s over 1” thick.

One final reminder if you’ll be doing it: the right time to perform the procedure is determined by the variety of grass you have planted and climatic situations….

machinelounge.com is a participant in the Amazon Services LLC Associates Program, an affiliate advertising program designed to provide a means for sites to earn advertising fees by advertising and linking to Amazon.com].