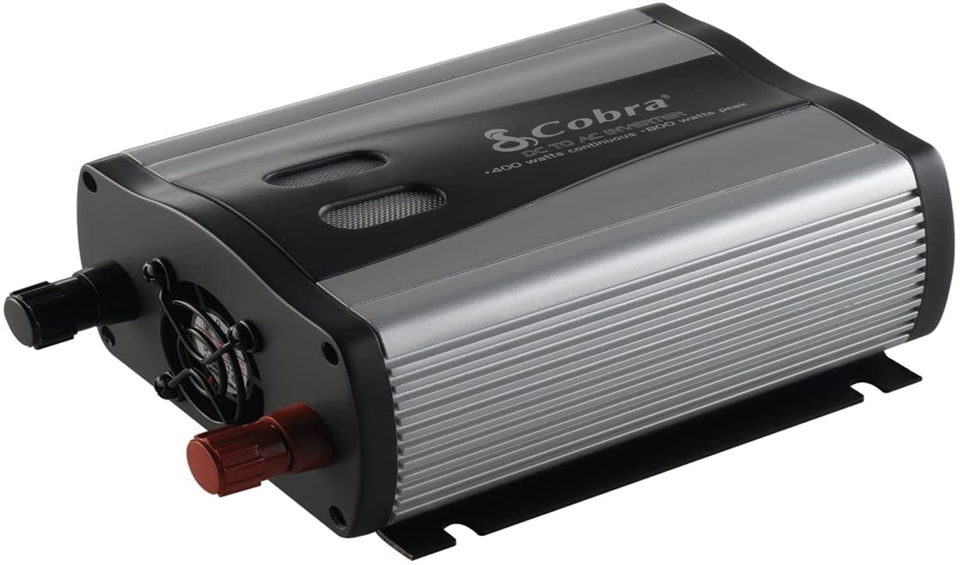 So, what will a 400 watt power inverter run?

Wondering what a power inverter can do for you?

Well, it’s not that small and you can use in a wide range of indoor and outdoor appliances.

Keep reading to find out what a 400 watts power inverter can actually run….

What will a 400 watt power inverter run?

Now, the range and number of items that a 400 watts inverter is able to power boils down to their actual power usage (in watts).

And so the most important thing is to have an idea of the energy drawn by the items you have in mind before buying a 400 watts inverter.

In short, you can go for a 400 watts power inverter if the total wattage drawn by the appliances you intend to use is less than 400 watts.

Of course, you need an inverter with a higher wattage once the total draw exceeds 400 watts.

For example, if you want to use an 800 watts freezer together with a 150 watts stereo, you will require a 950 watts inverter.

To make life easy for you, we have compiled a list of devices that a 400 watts capacity power inverter can comfortably run.

Read about them next.

Below is a list of common accessories that can be powered by a 400 watt inverter.

You may find life unbearable without a blender in your house.

So how much power does it use and will a 400 watts inverter be adequate?

Well, a small blender that you may use for soups and milkshakes will require about 200-400 watts for a smooth run and will be okay with a 400 watts inverter.

However, other blenders for tougher jobs in the house can use up 750 watts and require something bigger.

Overall, the power consumption of your laptop depends on the size of the screen.

However, the normal range is usually between 50 watts for small laptops and around 100 watts for larger more powerful ones.

Therefore, with a 400 watt power inverter, you can work on your dependable laptop without a worry in the world.

When your house is scorching hot during summer the first thing you wish for is a fan.

The good news is that a ceiling fan draws less energy than an air conditioner.

To be specific, different models of ceiling fans consume between 50 watts and 120 watts and will be at home with a 400 watt inverter.

That said, a wall fan consumes between 45 watts to 60 watts while a box fan sups up 200 watts when turned on.

For some folks, watching TV is part of everyday life.

You’ll be happy to know that most TVs will use between 80 to 400 watts of electricity meaning that you won’t be missing out on the action (unless it’s one of those energy-guzzlers).

Your mobile phone is an everyday essential and you can’t imagine a moment without it during your road trips.

Here is the best news: A cell phone is one of the lowest power consumers since they use approximately 2 watts to 6 watts when being charged.

Now that is negligible for a 400 watts inverter!

Your mixer ensures that your food is properly and quickly whipped and is another vital kitchen appliance.

A standard mixer in your home will require an average of 300 watts to run hence you can plug it into your 400 watts inverter.

Although the use of DVD players is going down thanks to more advanced technologies such as live streaming, some of us still use them.

If you plan to use a DVD player off a 400 watts inverter, you’re in luck as it only needs around 14 watts.

Is it that time of the year when the biting chill makes having a cozy electric bedspread a must-have?

Life should be a bit bearable with your 400 watt inverter because it gobbles up just about 50% of the available wattage (200 watts).

Do you use a paper shredder to destroy confidential and sensitive documents?

If yes, you can use a 400 watts inverter with this device because it operates at about 200 to 250 watts.

A freezer is also an ever-present in kitchens today and a basic to many.

Your average chest freezer uses 300 to 350 watts meaning that inverters with this capacity will be more than perfect.

A humidifier consumes very little power -between 20 to 50 watts- and can, therefore, be run using even smaller-sized inverters.

The bulbs you find in the market today have extraordinary energy-saving capabilities and will work well with 400 watts inverters.

Even more interesting is the fact that lights drawing very little wattage shine enough to illuminate your whole house.

For instance, you can find a 3 watt bulb producing the same amount of light as a 30-watt fluorescent lamp.

What else will a 400 watt power inverter run?

There’s quite a lot that your power inverter can run.

Here is a list of other products that can be powered by a 400 watts inverter:

As mentioned earlier, a 400 watts inverter can run a great deal of the TVs in our living rooms and RVs.

In fact, one of the biggest advantages of today’s dominant LED and LCD TV technologies is their amazing energy efficiency.

I must add that the usage is not equal and it largely depends on the size of your TV along with the display technology in use, with LCD and CRT models coming last in terms of energy savings.

Here is a table to guide you:

When using an inverter during a power failure and your unit is not exactly big, you should reduce the number of appliances you have plugged in and leave only the key power requirements.

This will give you more hours.

How fast will power inverter drain battery? We answer

What size inverter do I need to run a microwave?

What size inverter do I need for solar panels? We answer