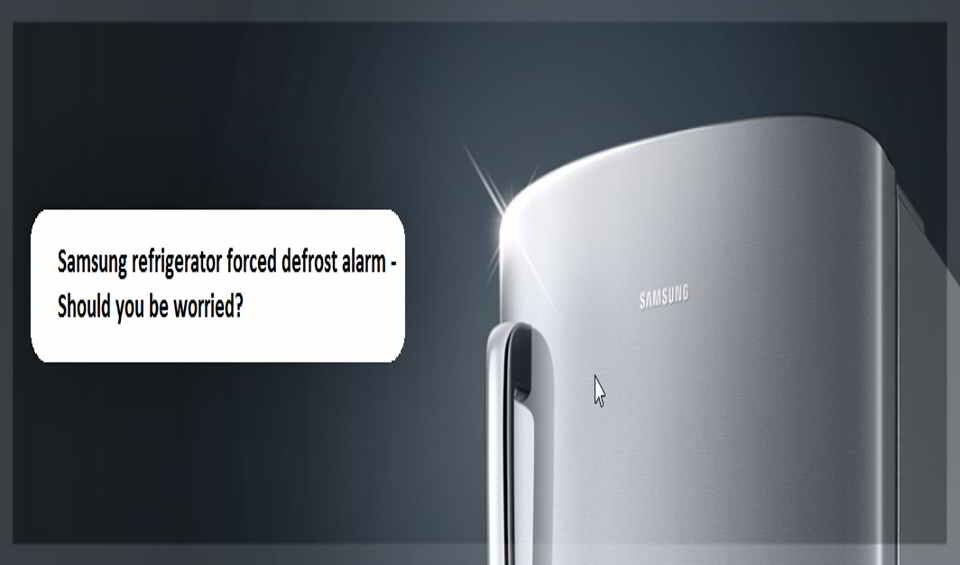 An easy way of resolving freezing issues in your Samsung refrigerator is using the force defrost feature….

It is a more friendly option (and faster) than having to take the internal parts apart and manually melt the ice buildup using your trusty hair dryer.

It happens and you may want to know if there is reason to worry about the whole forced defrost (“Fd”) process.

Short answer is: You don’t need to worry!

The reason? It is very normal for your Samsung refrigerator to beep once the forced defrost is activated!

In fact, it is important to note that, for the most part, your Samsung fridge should beep every second of the whole forced defrost cycle.

In short, the beep will sound until your refrigerator is done with the forced defrost (and it has returned to regular operating mode).

So just sit back and relax for 20 minutes (it may go up to 40 minutes) to the “calming sounds” of a FIRE ALARM (lol!) -it will stop beeping when “FD” forced defrost is finished.

Certainly, the fire alarm will be back if you run another forced defrost cycle (it can take more than two cycles to completely defrost the refrigerator if it was badly frozen).

At times, you may want to cancel forced defrost on your Samsung refrigerator- you could, for example, feel that something else is amiss and you need to check what the fault is before proceeding with the forced defrost process.

Here is how to turn it off once started:

Go back to the control panel and press the combination of the buttons that you had used to start the defrost mode (the different button combinations for different Samsung refrigerators are listed in the next section).

Press the correct buttons until Fd appears on the display then cycle through the various options (by, for example, pressing the Fridge button) until you come to the blank option – this will turn it back off.

Otherwise, after 20 minutes (or so) to 40 minutes, it should turn off on its own (it automatically kicks back to normal operating mode).

Another option is unplugging the fridge for 30+ seconds.

How to force defrost Samsung refrigerator

There are a couple of different models of Samsung brand refrigerators and they tend to have slightly different ways of activating the Forced Defrost procedure.

Press and hold down ENERGY SAVER +POWER FREEZE/FREEZER concurrently -for 4 (or so) seconds. You should then hear a “beep”, and the display would show “OFF”.

If you then press the “fridge/power cool” button, it will switch to forced freeze mode.

Now, if you press the same button again 3 times, it would finally switch to forced defrost (Fd) mode.

Press and hold down “ENERGY SAVER”+“FRIDGE” buttons for about 8 seconds.

The display would power off.

The display would go bland and the fridge would beep.

Now press FRIDGE button 4 times- both your refrigerator and the icemaker should go into forced defrost mode(“Fd” appears on the display).

Keep in mind that you cannot force defrost the ice-maker separately.

Press and hold down FRIDGE+POWER SAVE buttons -for 8 (or so) seconds.

You should then press the FRIDGE button until “Fd” appears on display.

Press and hold the COOL SELECT+FREEZER buttons for about 8 seconds.

Here you need to then press any other button 4 times to switch the unit to forced defrost mode (“Fd” will pop up on the display when it has been activated).

Press and hold the FRIDGE+ENERGY SAVER buttons for about 8 seconds.

Next, keep pressing the fridge button until the display switches to “Fd” (meaning the forced defrost mode has been turned on).

The trick to get it to enter the FD mode is holding down FREEZER + CONTROL LOCK for 10-12 seconds. The display will flash.

You should then hit the Control Lock button 4 more times for FD to show up.

For Samsung RF238090SR/AA model, the buttons to press at the same time are FREEZER+CONTROL LOCK until it starts to blink.

You should then cycle to “Fd” option.

How do you force defrost Samsung fridges that don’t have an exterior panel -but only an interior one?

Answer: hold down the buttons FRIDGE+ FLEX ZONE for about ten seconds. All the button lights will flash.

You then just press FLEX ZONE until you see the option “Fd”.

It will beep once, and then there will be intermittent beeping through the process.

Samsung refrigerator stuck in defrost mode. What should I do?

If your Samsung refrigerator stays stuck in defrost mode for an extended period of time, try to cancel the Defrost mode by cycling through the defrost mode options (in the panel) until you get to the option to turn it off  (blank).

How often do you have to do the force defrost?

You should only do it when necessary – that is when your unit is having serious icing up issues and normal defrost won’t work.

Now, if you are constantly wrestling with ice buildup problems, try the following:

How to defrost the ice maker on a samsung refrigerator

2 thoughts on “Samsung refrigerator forced defrost alarm – should you worry?”