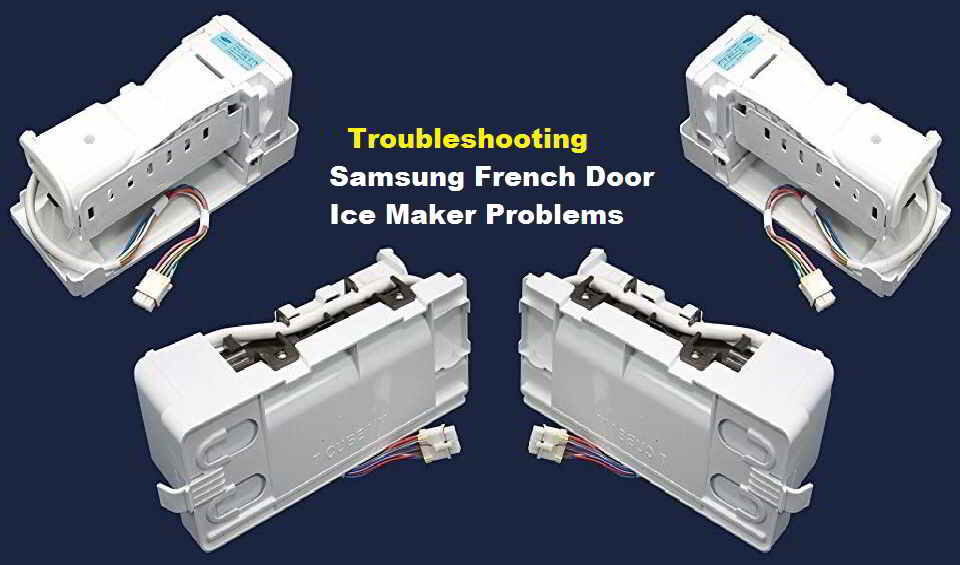 Are you wrestling with myriad Samsung French door ice maker problems and you can’t imagine having to start buying ice from the store especially after spending so much on the fridge?

Well, here comes a handy repair guide to help you resolve a wide variety of Samsung French door refrigerator ice maker issues and get it to work again.

Let’s face it: These Samsung appliances can be a huge pain thanks to a wide variety of faults – they keep frosting up, randomly stops dispensing ice, and even start leaking water just to mention but a few of their million troubles.

But don’t bin it yet- we will show you the tricks and workarounds to get it back to business once more.

One of the most common Samsung French door refrigerator ice maker problems is freezing up.

Now, for the issue of Samsung French door ice maker frosting up, the following fixes usually work (try them).

Remove the container and check if it is frozen-up. It is, in most cases.

The easiest fix is to remove the tray, then use a hair-dryer to melt the ice in there- you may want to place dish towels (in the bottom) first to catch water.

Reinstall the tray, once done- and be sure to chisel out stubborn ice, if necessary.

Keep in mind that you need to reset your ice maker before trying to use it again.

Other ways of thawing the ice maker

The nature of the problem can also be fixed by simply powering off the refrigerator for a few days and let ice melt by itself.

Another solution is getting the ice-maker out then putting it in a sink until the ice jam melts.

Now, the only downside to defrosting this way as a fix is that the issue is likely to re-occur since the root cause of the problem has not been addressed.

Long lasting solutions to the issue of freezing up

Caulk all the seams and cracks and see if it will stop freezing up- it prevents warm air from getting in and causing freezing.

Quick Note: Buy clear silicone caulk then go around all those areas where there are seams and apply it appropriately. 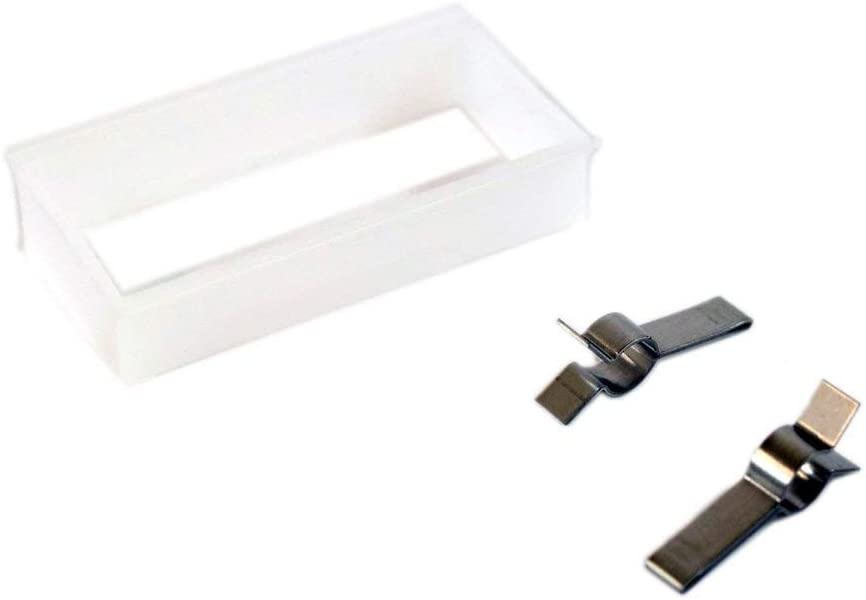 Some experts recommend the installation of these clips as a way of preventing the re-occurrence of massive icing over of the ice-maker compartment.

The clips have been designed to address this glitch by having condensation follow the coil, right down the clips and into the drain (be sure to look in there if they could have been already installed).

Once they are delivered, search for a good YouTube video to help you install the Y clips. It is very easy.

The other thing you may need to do is replace the Samsung Ice Maker itself as part of getting a lasting solution.

You can order the DA97-15217D Samsung Ice Maker Assembly from Amazon or sites such as partsdr.com.

And the good thing is that the part is compatible with lots of Samsung refrigerators including French door units.

Installations directions are again available on the web. Search “How to replace Samsung French door ice maker” on YouTube.

In short, sealing the ice-compartment, replacing the ice-maker and Installing the Y-clips often solves the issue of non-working ice maker due to frost /ice-buildup in the compartment.

You can also try the list of fixes below (in the order listed) if you are looking for a permanent Samsung French door ice maker fix for frequent ice buildup fault:

Remember that the links are just to point you in the right direction- Check compatibility before ordering any part by going through the description or messaging the seller with your specific model number.

This Ice Maker Service Kit (alone) may also resolve the problem of recurrent freeze-ups in some models for long so you can consider it.

You will need a work light screwdriver, putty knife, plus a handheld steamer for the installation.

Don’t worry about the installation- the instruction sheet is really handy.

Quick Tip: The kit resolves other problems including the problem of Samsung French door ice maker not working and is worth a shot before thinking of replacing the whole unit.

Typically, resetting the ice maker can be extremely helpful- it does the trick on a number of Samsung French door ice maker problems so trying it is a smart move (before trying more complex fixes).

Well, it is not always magical so you will want to try the other fixes (depending on the problem) if resetting does not bring the results you had hoped for.

Quick Tip: Before giving up on the reset working, try to go old school- trip the breaker (for about 10 minutes) then turn it on again. This may reset the whole appliance including the ice maker. You can also unplug it for about 2 minutes then plug it once again.

If you are hearing odd noises from the icemaker but no ice, you want to defrost it- icing up is frequently to blame for the noise so getting rid of the ice is the priority.

Don’t forget that too much ice buildup tends to interfere with the smooth operation of the fan (the noise may be as a result of the fan hitting accumulated frost).

We already discussed how you can defrost the ice maker so go ahead and first de-ice it.

Below we look at how to defrost the fan..

How to defrost fan on Samsung refrigerator (French door)

Now, defrosting the blades may necessitate the removal of not only the ice maker but also auger motor assembly (from the rear).

You then use the hair dryer to clear the ice then reset the icemaker.

Quick Tip: Be sure to clear any dust that has accumulated on the vents (at the back of your fridge) since it could be one of the reasons you are experiencing this issue by blocking airflow.

Another known problem is the ice bucket getting stuck and it could (again!) be because of getting frozen solid.

And this means you once again need to do the defrost thing- grab a hairdryer and blow hot air where the ice is until the ice buildup is melted then try to remove it.

It is worth adding that sometimes it needs to be steamed to free up the jammed ice maker.

And oh, once you clean out the entire frozen residue, hit the reset button before attempting to restart ice production.

Quick Tip: You want to be double sure that you’re following the right procedure when trying to remove it so refer to your manual for instructions on how to remove ice bucket from Samsung French door refrigerator. In fact, all it sometimes takes is pulling it up then lifting it out gently to get it out. Other models will need a good tug to get it out.

You can as well attempt the following procedure if the ice maker is so hard to get off:

Here are general solutions for the issue of Samsung French door refrigerator lower ice maker not working (not making ice) -Don’t forget to check if the ice-maker is on before moving on:

Remove frost and the frozen ice then start over again

Samsung French door ice maker won’t work (bottom) if it is all frozen over- big chunks of ice could be lodged in there thus keeping the machine from operating.

Try to fix the icing up, reset it, then start afresh.

Apart from icing problems- and ice buildup is the most notorious of the probable problems- there are other solutions worth a shot if you are still experiencing the fault of Samsung French door ice maker not dispensing (/making ice at all).

Process of checking if it getting enough ice:

The thing is if it doesn’t fill up to 6 ounces of water in this time, the water line likely has an issue.

The next section will give you tips on how to troubleshoot the issue….

Lastly- as incredible as it sounds- the ice maker could also be in need of a reset.

If it dispenses crushed ice instead of cubes, first check that you selected the correct setting on the panel (make sure you selected cubed).

Then, check the temp- it is likely to dispense crushed ice if the temp is too cold- and raise the refrigerator temperature (check your manual for Samsung recommendations).

Lastly, if ice is not getting dispensed properly by Samsung French door ice maker, check for buildup of ice (at the dispenser). It may be the culprit and you need to tackle it.

The issue of leaking water (from the inside) can be caused by many faults but the most common is the icemaker freezing up.

So you should begin your troubleshooting by thawing it out with a dryer as described earlier.

Also check if the ice-bucket is cracked since this makes it begin freezing up frequently.

How do I fix my Samsung French door ice maker?

How do I reset my Samsung French door ice maker?

Here is a reminder of how to reset Samsung French door with ice maker refrigerator:

If you are lucky, you may just hear the sweet sound of nice little ice cubes once more.

One final thing: You can try to call Samsung if your problems persist- it has been reported that they are replacing all parts on defective ice makers at no cost.

How to defrost the ice maker on a samsung refrigerator