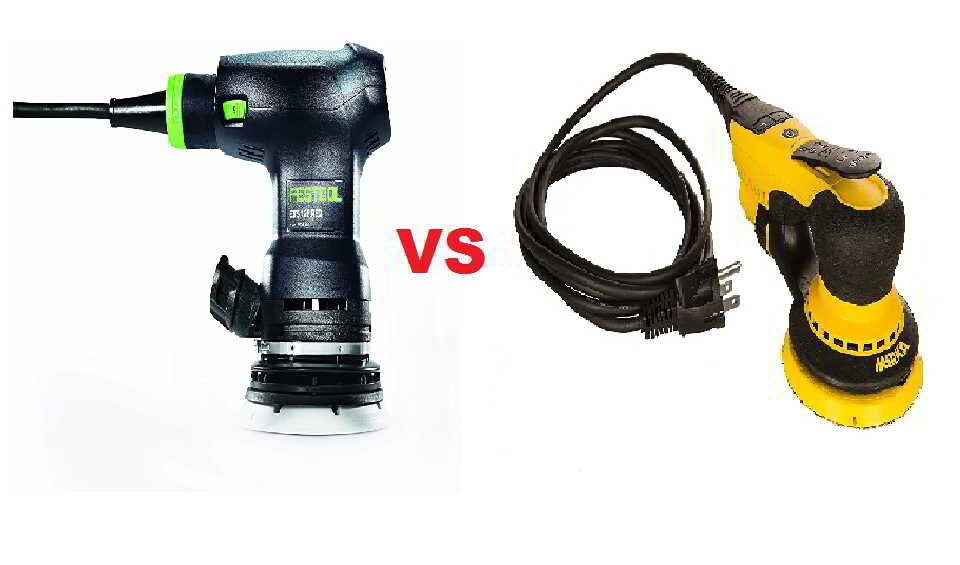 When it comes to top-of-the-line sanders, the choice often comes down to Mirka Sander Vs Festool.

Below we run a comprehensive Mirka Sander Vs Festool comparison to point you in the right direction, if you’re to purchase just one of them (these are super expensive tools and you naturally want to be sure you’re making the right decision).

So let’s dive in:

Now, one aspect that you cannot quite bank on if you want to separate these two awesome tools is performance because they really are nearly equal as far as performance goes.

Put another way, it is difficult to tell the tool that one has used by looking at the final results- They’re basically comparable.

That said, the Mirka seems to be more of a workhorse (it’s more versatile) while Festool appears to shine more as a surface sander (for bigger panels).

And yes, the extra weight of the Festool helps a lot on large flat workflows- the weight does make it easier on all species of wood so it really excels on flat surfaces.

On vibration as well as ease of control

The Mirka Sander is definitely better on vibration as well as ease of control.

In short, if you have been planning to buy a Festool such as Festool rotex 150, you will be better off going for the Mirka as it is much easier to use thanks to the lower center of gravity.

Yeah, Festool is a little bulkier (feels top-heavy in the hands) and hence a bit more tiring to use when working on edges, bevels, and such things.

As regards vibrations, Mirka sanders tend to have fewer vibrations when in use and are less rough (comparatively).

Using the (paid) app to monitor speed and vibration is also truly useful and helps in keeping vibration levels low to stay healthy.

To cut the long story, Mirka sanders are simply the more ergonomic (of the two electric sanders) so you can use them for hours without much pain.

Still on what’s relatively easier to use, there are those who are convinced that the whole decision ultimately comes down to your preferences in terms of paddle style (or not).

And the truth is that this usually ends up tipping the scale in favor of either tool..

You see, if you abhor paddle style tools- because you don’t like having to depress the paddle all the time- then you are likely to like Festool more.

In contrast, if you’re used to that paddle- and it’s something you like- then you might find Mirka just fine (and it’s true there are folks who find working without a paddle daunting).

There is one key area Festool wins hands down: it is the better engineered of the two- Festool sands seems to be very well built (with high quality materials).

The general consensus is that Mirka sanders does seem to wear down quicker and they have to be sent off to be repaired more often than Festool (Festool does not suffer reliability issues except you having to change the pads and brushes unless it’s a brushless Festool).

The other thing we have noticed being mentioned by a significant number of owners is that the Mirka gets hot compared to the Festool.

Just to add, if you are a weekend hobbyist- and you’re not going to be using Mirka for endless hours each day- then Mirka can last longer.

Turning to the vacs

While they are both great vacs, users feel that Festool sanders tend to be a notch above – the dust collection is pretty incredible honestly and that’s super important..

Is Festool sander worth it?

In most countries, Festool sanders are a bit more expensive than Mirka sanders.

However, there are woodworkers who swore by Festool sanders – they claim they are the best sanders you can ever use, by far, as long as the price won’t give you a heart attack!

On the other hand, there are those who are of the opinion that Festool sanders are a little overpriced and would rather go for Mirka because the final results are essentially equivalent.

So, is Festool sander worth the money?

Well, it’s upon you to decide if it is worth it, going by the previous points.

You get a lot more tool options with Festool because Festool creates accessories for the tool that broadens the use of the tool (with Festool you’re buying the festool ‘system’).

In addition, with Festool like Rotex 90, you can put it into the extra aggressive gear mode when you want to remove more material faster and then change to orbital (for medium/finish sanding).

Lastly, Mirka appears to take more time to spin down– obviously, having to wait those extra few seconds can be frustrating.

Mirka is not just more comfortable in use, particularly for vertical sanding- we find it easier to switch the pad (of course, there are tasks you will find a different pad size more practical).

What else should you check?

Besides, it’s easier to follow up on the warranty (and returns) when tools are locally available compared to when you have to import.

Which Mirka Sander do we recommend?

Overall, Deros (Mirka Deros) is a standout out there and everyone who uses (or owns one) swears by it!

Perhaps you should try it out too if you want to go the Mirka route.

Which Festool sander is best?

Ultimately, these are both amazing and robust tools and if you have the budget, it would even make perfect sense to buy both- having both can make a world of difference for your projects.

But that is not always the case so the above Mirka Sander Vs Festool side by side should help you choose the tool that will serve your sanding needs best depending on what you’re sanding.

Just to reiterate, none of these tools will be easy on your bank so be careful when deciding.

Electric sander for car bodywork- top 3 picks in the market