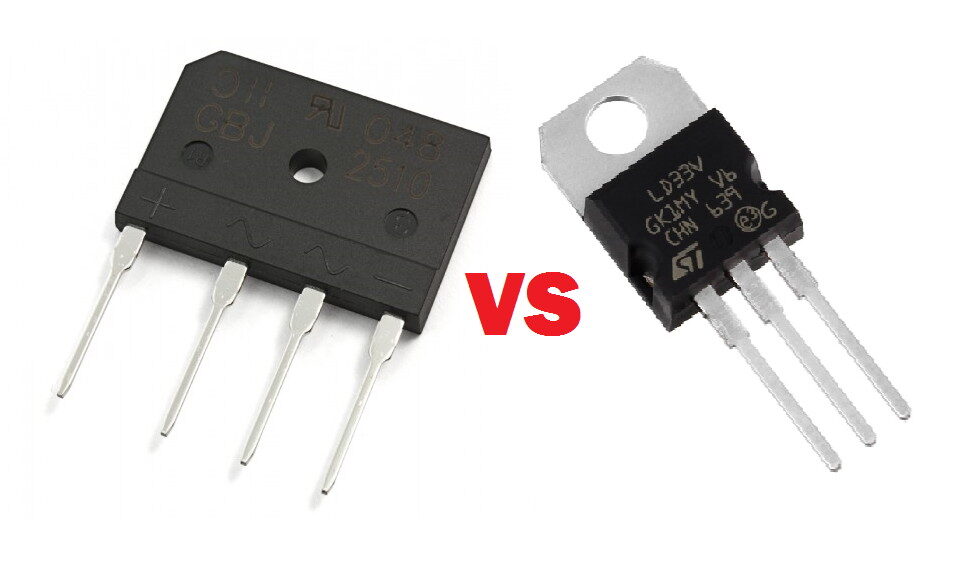 Yet, the two are significantly dissimilar as you’ll learn in this article.

To start with, let’s briefly look at what precisely a rectifier is.

What is a rectifier?

A rectifier is nothing else but a device that converts the alternating current(AC) to direct current(DC) in a process called rectification.

This helps make the AC energy useful in electronic circuits that require DC voltage, mostly those found in things like detectors, some DC power supplies, and even home appliances like televisions, video gaming systems, and more.

In general, voltage rectifiers use a combination of diodes in particular arrangements to complete the rectification procedure.

We shall get deeper into the details of the rectification operation after introducing the voltage regulator, another widely used piece of equipment that some mistake for a rectifier.

What is a regulator?

Now, a common issue that arises with rectifiers (and a couple of other electrical systems) is that AC power typically experiences peaks and lows.

As you might be aware, this could be hazardous to equipment that runs on steady, reliable current like computer power supplies and could even ruin them.

As such, the regulator becomes a necessity in the diverse electronic components needing well-balanced, clean energy.

And that simply because its main function is to stabilize the DC or AC voltages (depending on the regulator design) and establish constant voltage level.

In short, a voltage regulator acts as a smoothing circuit in such systems.

Can you now see why we keep on insisting that there’s quite some difference between rectifier and regulator?

Let’s move on so that you can understand this clearly.

It’s possible to change AC current into DC voltage as long as you have a PN junction diode, one of the most basic semiconductor devices around.

It’s not even complicated and all the PN junction diode does is let electric current flow in one direction (only), what we call a forward bias condition.

During the process, the electric current in the reverse bias condition is blocked.

That essentially is how rectification occurs.

Time now to learn how a regulator operates..

To keep voltages in ranges that won’t be detrimental to the electrical appliances using that voltage, a regulator utilizes solid-state semiconductor devices in order to moderate voltage and current.

To be clear, the exact mechanism used to smooth out the variations depends on the type of regulator- some use switches and others an additional voltage (more on this shortly).

We don’t want to go too deep into the technical stuff so for the purpose of this article, we’ll look at the two main types of rectifiers and likewise, two most common types of regulators.

Keep reading to understand how to differentiate the two.

Half-wave rectifiers: A single diode is used here to convert half the fed AC signal (technically called positive half cycle) into DC output. The other half signal (referred to as negative half cycle) is covered up.

Full Wave Rectifier: The two half cycles (positive and negative) are converted. In terms of efficiency, these triumph over half wave rectifiers.

Step regulators- These use switches to even out imbalances (the switches put the device on/off quickly to change the output).

However, as hinted earlier, you’re likely to find them used as components in DC power supplies (like in PCs) as well as high-voltage DC power transmission systems.

Moving on, regulators are vital in systems easily harmed by unsteady voltage.

What is the connection between regulator and rectifier?

In most applications, the voltage output by a rectifier is usually smoothed by first, an electronic filter (could be a choke, capacitor, or even sets of chokes, capacitors, and resistors).

But to guarantee a steady voltage continuously, a standard voltage regulator comes behind the filter further tidying up the current.

Having said that, some machines feature both voltage regulators and rectifier circuits built in a single component, with each carrying out their specific roles as discussed above.

What is the difference between rectifier and regulator? Comparison table

As you have seen, there’s quite a notable difference between rectifier and regulator.

And just to recap, they differ in their mode of operation, function, as well the applications they’re commonly deployed in.

Perhaps the biggest thing to note is that a rectifier converts input AC power into DC electrical power.

Regulators are, on the other hand, systems configured to automatically maintain a constant voltage level to protect various apparatus against damage that can be caused by fluctuating voltage.

Here is why your Portable air conditioner fills with water quickly